Plants that have flowers that point towards the sky may be better at attracting pollinators than plants that have ‘shy’ flowers that point sideways. The study, by researchers in the USA, Germany and South Africa, used two species – Zaluzianskya natalensis and Zaluzianskya microsiphon – to investigate the idea that flower orientation, in combination with floral scent, affects the behaviour of pollinators. 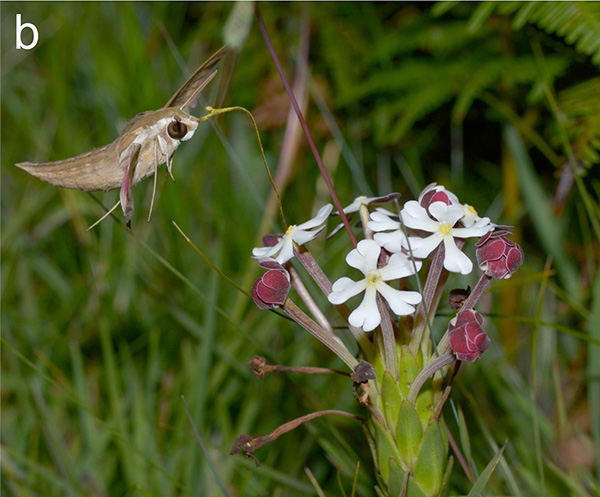 Extract from Fig. 1 in the article, showing Zaluzianskya natalensis being visited by the hawkmoth Hippotion celerio.

Both flowers are open in the evening, and attract hawkmoths, which pollinate them. In the experiment, hawkmoths showed a preference for Z. natalensis flowers. Z. natalensis produces more floral volatiles than Z. microsiphon – it has a stronger scent to pollinators – but artificially adding more volatiles to the flowers had no effect on the numbers of hawkmoths that visited.

This study, published in New Phytologist, shows the importance of flower orientation in affecting how pollinators behave, which in turn influences the reproductive isolation – the chance of inter-breeding – that those plants experience.

This is the original draft of a press release submitted via the Wiley newsroom, and appears in edited form as a news post on the New Phytologist Trust website.